Robert William Eaton (“Brijendra”): Meditator, teacher, and writer. Among his writings are works on the philosophy and practice of Yog (yoga), poetry, and songs. “All Around the World” was written and composed in 1988, this version was recorded in 1990. After attending a satsang of his Guru-ji, Swami Shyam, Brijendra, while making his way back to his room, found he was spontaneously humming a tune as he walked along the road. By the time he reached his room, the tune was complete. Picking up pen and paper he wrote the words out “with virtually no changes needed. It seemed as if the entire song just appeared from beyond. It is a song of prayer and praise to the Supreme Self. Shyam is the colourless Space you see when you close your eyes. Shyam is infinite, Pure Consciousness— your own Self.” To contact Robert please visit his website. 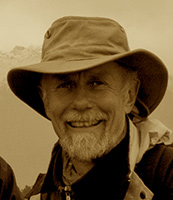 Malcolm Reid (“Mayank”): tabla, ghatam, percussion
Mayank, a professional drummer from New Zealand, ably assisted Dattaa as co-producer, studio engineer and performer. Mayank created tabla and percussion tracks and applied his engineering and mastering skills to what you hear on the final tracks. To contact Malcolm please visit his website.

Peter Follett (“Peeyush”): santoor, electric guitar
Peeyush, a professional studio musician from Canada, added his magical touch to the Sanyam CD. He played the celestial santoor, a multi-strung hammered zither, on the meditative Sanyam track and some jazz-cool electric guitar on Yogasana.

Yosef Dayan (“Arsee Prasaad”): djembe, ghatam, percussion
Yossi, a professional percussionist and drummer from Israel, has performed and recorded with artists and ensembles – jazz, fusion and Indian chant – in Europe, Australia, India and USA. He recorded integral percussion and core rhythm performances on the Yogasana track.